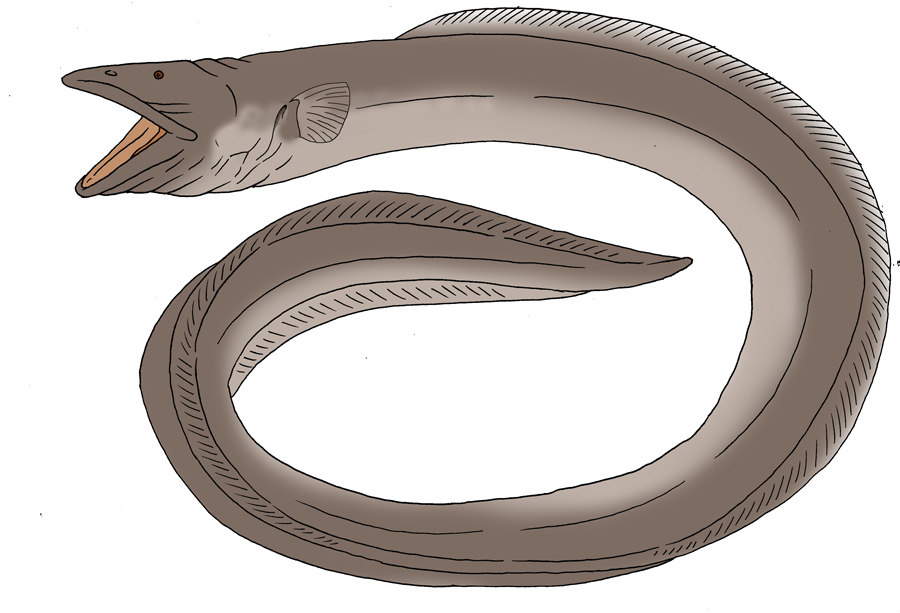 Location: Cosmopolitan, sighted in all the planets oceans.

To many, the most logical animal candidate for the sea serpent is an elongate fish such as an eel. Certainly, Bernard Heuvelmans agreed, and made this one of his sea-serpent categories, the “Super Eel”. He specified that this creature may constitute more than one kind of eel, all united by their huge size and considerable length.

These serpents are usually sighted at the surface, in the open ocean, moving by a snake-like undulation, typical of all eels, and often seen opening and closing their mouths regularly. Many cryptozoologists have considered that this creature must be a denizen of the deep sea, to be seen so seldom. Bernard Heuvelmans speculated that, in order to attain a gigantic size, the super eel may have evolved into a whale-like filter feeder.

The sightings themselves vary in quality and reliability. Some sightings attributed to this category do not seem very eel-like at all, and Heuvelmans often included sightings in certain categories for convenience, rather than the actual description. The super eel category was considered a distinct possibility for some time, because of a 6 foot long eel larva recovered by the Dana vessel in 1930. Extrapolating from common or conger eels, the adult would be up to 30 times longer than the larva. Alas, this larval specimen was later identified as belonging to a spiny eel, which do not grow much bigger than their larva. It should be noted that infertile adult eels can grow to a considerable size compared to breeding ones, as they may live for much longer, growing continually during this time. Indeed, exceptionally large specimens of known eel species may account for some of these sightings.

If the Super Eel were indeed a real animal, it would surely be and impressive and imposing beast. The Super Eel (Ceticonger longus) is widespread in the temperate and cold oceans of the world, and most commonly follows food resources with the change of season. Being a filter feeder, the Super Eel feeds mostly on krill, copepods, and baitfish like anchovies, but will selectively feed on other marine invertebrates, such as jellyfish and ctenophores. Equipped with large toothless jaws, it feeds by engulfing its prey by the mouthful and filtering it against large gill rakers, the gill opening is large to facilitate the outflow of water. It is so seldom seen, because it spends most of the daylight hours at great depths, following plankton swarms to the surface by night in a vertical migration. Not much is known about the reproductive habits of this eel, but the larvae are most often caught in Arctic or Antarctic waters, suggesting that the breeding grounds are at the poles. Adult super Eels can reach up to 20 meters long, and larva can be 1.7 metres long.