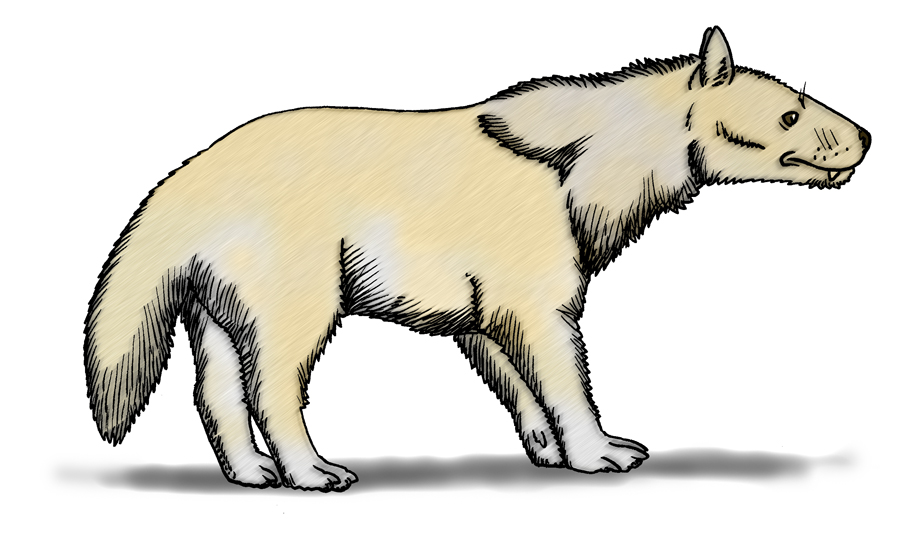 Wolves and wild dogs have often lent themselves to myth and folklore, such as Werewolves, Orthrus and Cerberus. Less well known, but equally frightening is the Waheela of the Canadian north, a huge white wolf that is reputed to be a deadly man-eater.

A wolf-like creature over a metre tall, it has a large wide head and jaws, large spreading paws, and a shaggy white coat. The stories surrounding it were collected by Ivan T Sanderson, a notable and notably unreliable cryptozoologist. This beast was supposedly responsible for the death and decapitation of quite few people; such mutilations not being typical of normal wolves. The local Native Americans corroborated this story, and related that it was not actually a wolf, but a fearsome creature known to them as the Waheela.

It has been hypothesized that this creature may not be a wolf at all, but a massive prehistoric bear-dog (Amphicyonidae), this comparison seems forced, and it is a typical practice of cryptozoology to select prehistoric creatures as an explanation. In reality, the Waheela may simply be exaggerated stories of rogue wolves, and of course, simple cautionary tales from Native American mythology and folklore. The evolutionary principle of Bergmans rule states that animals closer to the poles are larger and heavier than their cousins in the tropics, so it is not inconceivable that normal wolves in Canada are larger and shaggier than those elsewhere.

For our speculative Waheela, we will avoid a survivor of prehistory, and adhere to Bergamn’s rule instead. The Waheela (Canis canadensis) is indeed, not a true wolf, but a very close relative. It seems that during the last ice ages, some ancestral wolves became more adapted to the cold tundra and woods of Canada and Alaska. The result is a wolf-like dog of substantial size, over a metre tall, with a massive head, white shaggy pelt and large snowshoe paws. Waheela live in smaller packs than true wolves, but will hunt larger animals, such as full grown bison, moose or bear, they are also better adapted to crush bone, and can consume more of the carcass. They are one of the few cryptids that are a genuine threat to humans; even a lone Waheela can easily overpower and kill a man. Often, the victim will be decapitated during an attack, by the bone-crushing jaws of this great northern dog.