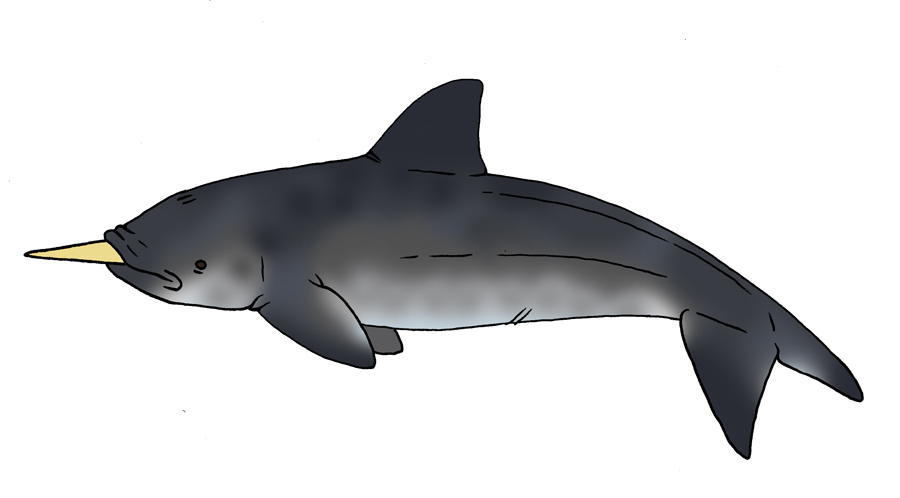 Some categories of un-discovered creature are less ridiculous than others. The possibility of unrecorded kinds of whale and dolphin remains fairly likely, as not only can some species be extremely elusive and shy, but new ones continue to be found. Thus, the category of unknown cetaceans can be approached more readily than typical “monster hunting”, because surely, another whale or dolphin is not inconceivable.

But what of the so-called Antarctic Narwhal, a supposed tusked, dolphin like animal, far from the distribution of the true narwhal? Sightings describe it as bluish, with a high fin, and an ivory tusk about 1 to 2 feet long. There were once relatives of the Narwhal in the southern hemisphere, but these were “walrus whales” 2 tusked, bottom feeders that were quite distinct from the typical narwhal. Conceivably, some relative of this creature, or maybe its ancestor, could have given rise to a southern narwhal-like animal, indeed, the ancestor of the true narwhal appears to have had 2 tusks originally.

In reality, these sightings sound suspiciously like fleeting glimpses of Swordfish or Marlin. One sighting describes the boat being rammed, leaving the broken “tusk” embedded in the hull, something virtually impossible for a permanent mammalian tooth, but well known to occur in swordfish. This alternate identity may or may not explain this questionable “narwhal”, but nevertheless, the cryptozoology of whales and dolphins remains as promising as ever. Indeed, such cetacean discoveries of the future may even be made by sailors, whalers, fishing boats, or beach-combers, instead of devoted cryptozoologists.

Speculatively, the Antarctic Narwhal seems promising, and not in need of fantasy or hyperbole. This 3 metre long cetacean, the Antarctic Narwhal (Australomodon cornudens) is widespread in the waters around the Antarctic Peninsula, and the southern coast of South America. It appears to share a common ancestor with Odobenocetops, the “walrus whale”. Both males and females have a single, white 1 to 2 foot long tusk, and second tusk is present, but hidden by the lips and gums, being much smaller. It feeds mainly by stirring up sediment on the seabed with its tusk, and rapidly sucking up any fish, worms or octopi that are flushed out. It generally surfaces to breathe in a fairly inconspicuous, rolling motion, with only its blowhole showing. Only when it is startled does it make a porpoising motion, or show its body or head above the surface. They travel in small family groups, and will mob sharks or other moderate threats by prodding and poking with their tusks. Their main predators are great white sharks, and orcas.