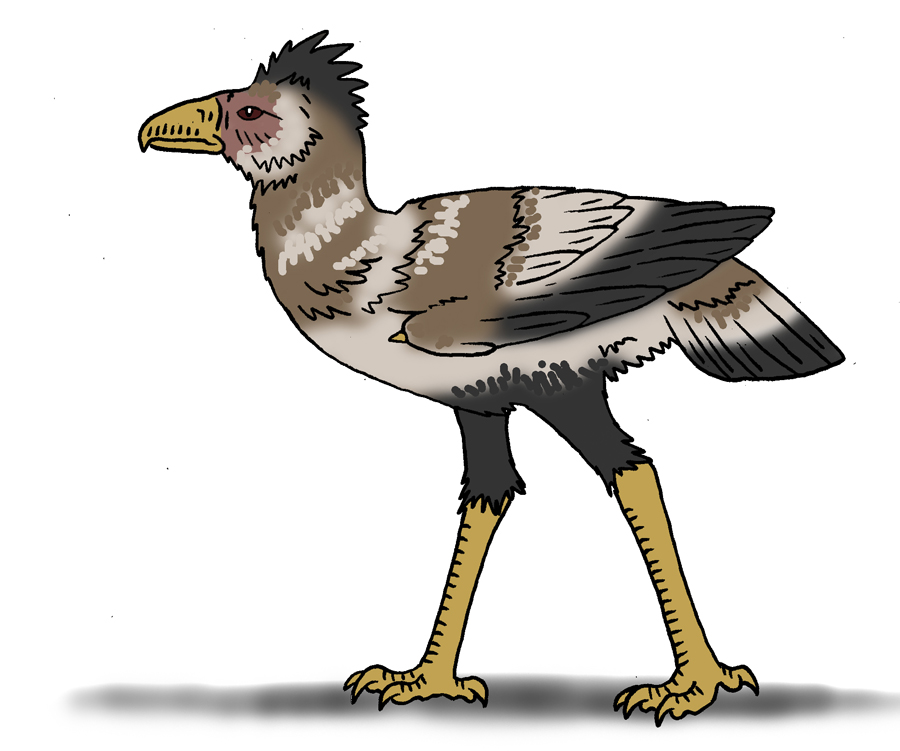 Time: Not seen since the 1800’s, myths attributed to it by the Bantu people.

A supposedly giant predatory bird was said to exist by the Bantu people in Tanzania, as large as an ostrich, but able to fly, similar in appearance to a secretary bird. Tribesmen were said to wear its skull as a ceremonial head-dress. Karl Shuker opined that it could be a very large relative of the secretary bird, and others have suggested that it could be a phorusrhachid. The latter suggestion was seen as unlikely (wrong continent?), but seems less ridiculous now that some terror bird fossils have been recovered from Africa. There is also an unusual bird fossil, Eremopezus, known only from foot bones, that may have been a large predator, but surprisingly, this creature has not been chosen as a candidate, despite the phylogenetic roulette typical of cryptozoology.

If this titular bird monster did exist, it could be a relation of hawks and eagles, like the secretary bird, the name given by Shuker (Megasaggitarius clamosus) would apply nicely. The Makalala is indeed a giant relative of the secretary bird; the two birds share a common ancestor going back to the Oligocene. As implied by the Bantu peoples, this bird commonly feeds on carrion, but it will often hunt live prey. Like a secretary bird, it enjoys feeding on snakes and lizards, indeed; it can sometimes be seen killing full grown pythons or monitors, small antelopes and even warthog are taken quite often, also. It kills prey usually by kicking it, wounding it with large talons, also striking with its beak. Being 6 feet tall at the shoulder, yet still able to fly, it has a highly pneumatic skeleton, making it relatively much lighter than an ostrich. Its large, rounded wings allow it to fly well over short distances, but most often, it prefers to walk or run. During the breeding season, males make display flights to impress females, flying in an ascending arc, whilst moving its legs in a running motion. When it wants to, the males can produce a loud clapping sound in flight, made by their wing spurs hitting together. This sound-based display is most often used during mating flights, and when confronted with a predator. Nests are made at the start of the wet season, in large trees, usually 2 -4 eggs are laid. Numbers of this bird appear to be low, and it is now rarely seen, it may soon become extinct.