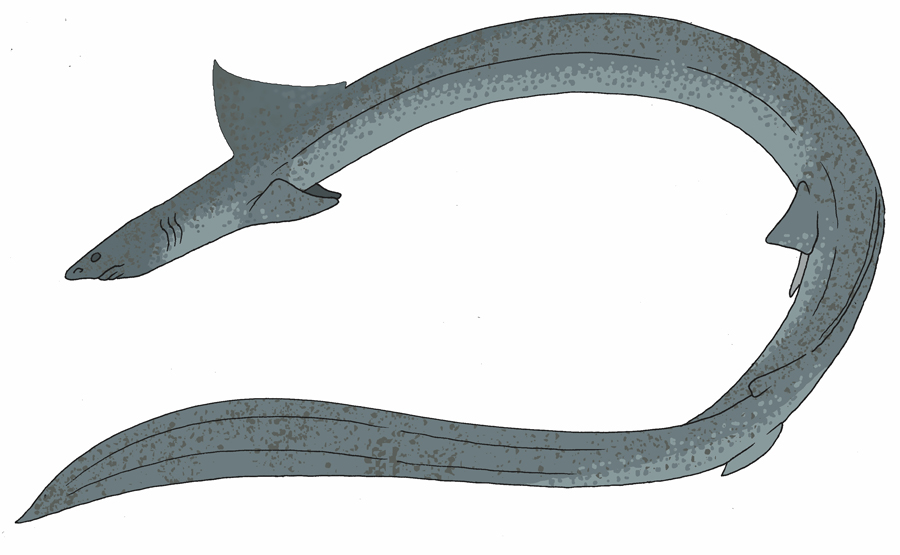 The father of cryptozoology, Bernard Heuvelmans, popularized many hypothetical sea monsters. Most of these were based on inadequate descriptions and sightings, used out-of-date information, and relied too much on speculation. One of the less ridiculous suggestions he made was the "Snark" or snake-shaped shark. One possible carcass that corresponds to this idea was a found at the turn of last century, caught dead, and was said to resemble a frilled shark, with the exception of fewer gill slits, and much greater size.

The idea of a serpentine shark that is around 25 feet long is not wholly ridiculous. After all, the megamouth shark was unknown until relatively recently, so a secretive, deep-sea shark could still lurk undetected. The carcass from New Harbor, Maine was probably something like an oarfish or ribbonfish, in reality, but the possibility remains that some unknown sharks, even large ones, remain to be found.

If we could speculate about a serpentine shark, what would it be like? Pictured here, the little known Snark (Ophioselache bernardi) is a deep-sea dweller of the North Atlantic. The largest individuals are 9 metres long, and slender, females being larger than males. The male has a taller fin, which the female holds with its mouth to grasp during copulation. They generally swim slowly above the bottom, many meters down, consuming slow-moving fish, crustaceans, and octopi, the front teeth are spike-shaped, and the back ones are flattened to crush crabs, lobsters and shrimp. They occasionally attack large squid, but their un-serrated teeth do a poor job of it, usually they grab only what they can swallow or crush. They are sometimes preyed upon by sperm whales, Greenland sharks, and giant squid. They are very rarely caught, it is possible that sick individuals, seen near the surface, can be mistaken for sea serpents.