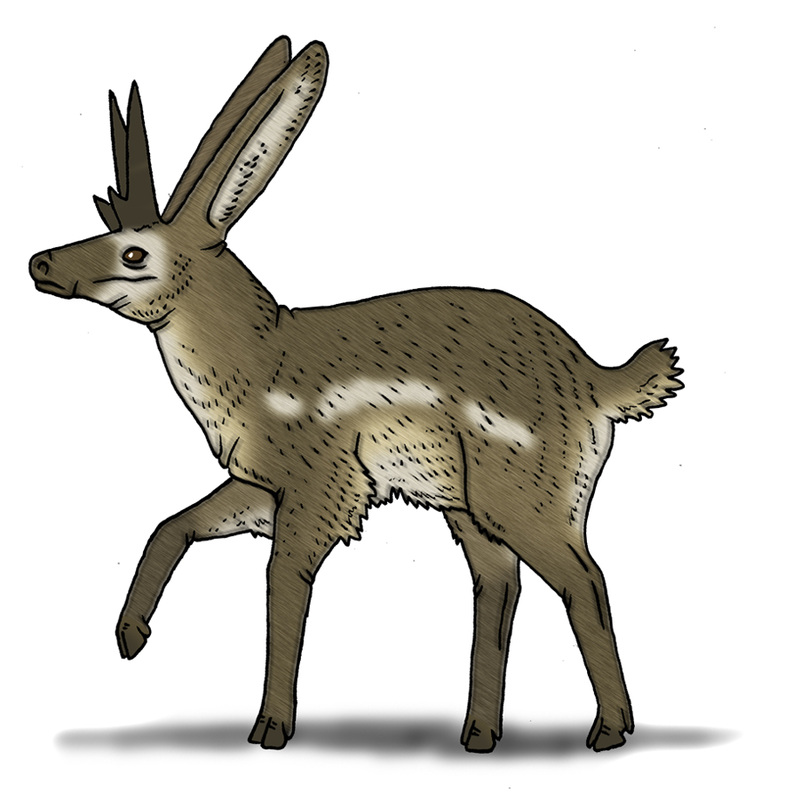 Time: First sighted in 1829, popularized in folklore and humour ever since.

Horned rabbits and hares are a fairly common theme in folklore, featured in bestiaries, taxidermy fakery, and even cartoons. The Jackalope is a prime example, generally accepted as a taxidermy hoax, involving a stuffed hare with the antlers of a pronghorn antelope or small deer.

Such a creature has been an icon and source of state pride for Wyoming, where it was supposedly first spotted, the name being trademarked, and the town of Douglas being named the “home of the Jackalope”. In reality, taxidermy fakery may not be the only source of this legend, hares and rabbits stricken with Shope pappiloma virus develop horn-like facial warts, resulting in creatures generally resembling the Jackalope. In fact, these sorts of disease may be singularly responsible for similar horned rabbit myths in continental Europe, the Middle East, and England.

The Jackalope is also the source of various half-serious jokes and anecdotes, milk from a female Jackalope is said to have medicinal properties, and hunters can supposedly be confused by this creature’s ability to mimic human speech. Jackalope hunting licences were issued to tourists visiting Douglas, Wyoming, with a series of rules and conditions that made it obvious that it was a joke. So, we can see that simple origins can become a rich and vivid folklore, completely regardless of the true nature of the beast (or its facial warts).

If indeed, the Jackalope were real, we may speculate that it is not a rabbit at all. The American Jackalope (Antillolepus mythica), inhabits many of the American states covered by the Great Plains. Despite its coloration and long ears, its hooves betray that it is actually a dwarf pronghorn, similar to those that existed during the recent Ice Ages. Being very shy and elusive, it is most active during twilight, feeding on grass and sedges, particularly newer growth that emerges after grazing by larger animals. It produces a yelping noise when alarmed, which sounds partway between a young child, and a distressed rabbit, leading to the myth that Jackalope can talk. Unlike larger ungulates, they are mostly solitary, females raising their young to independence quickly, by virtue of their rich milk. Both male and female possess horns, which are used in defence against smaller predators such as ferret and burrowing owls. During rut, leks form where males lock horns and toss dirt into the air with their horns, in an effort to impress females. Jackalope hunting has become a tradition in certain states, but the animal remains fairly common, even though it is elusive.