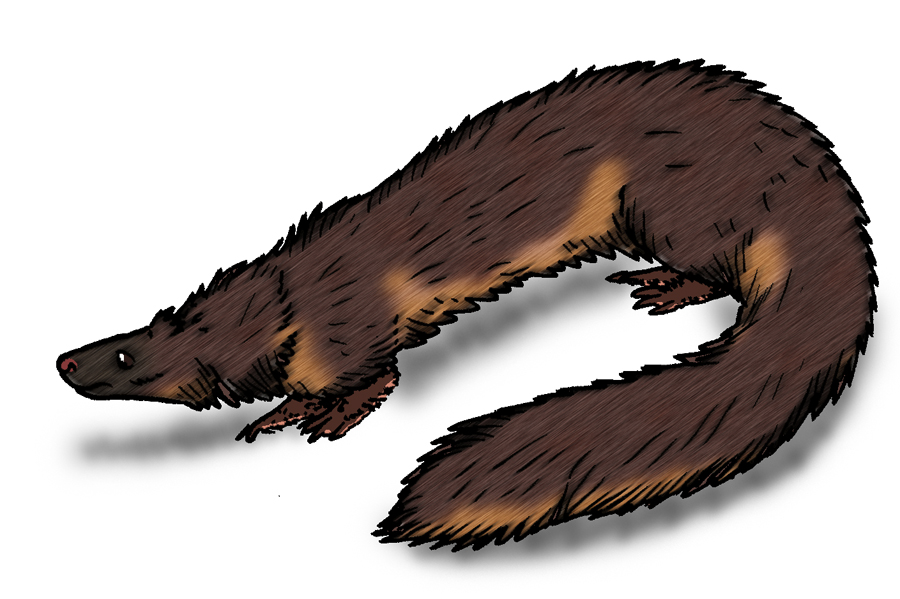 An unusual sighting in Algeria supposedly involved a 22 inch snake curled around the base of a tree, notable for its covering of brownish red hair!

This very strange and apparently isolated sighting is hard to classify. The two explanations offered are not at all satisfying, no known snake is covered in hair, and a caterpillar of such enormous size is impossible. So what could it be? There seems to be no likely answer, and this remains yet another oddball sighting, all the more unreliable because it has only been reported once. As is the case so many times, anecdotal evidence is generally not reliable.

We decided to abstain from creating a speculative snake that is truly hairy, instead opting for a vaguely serpentine mammal. The Viper Stoat (Ictophis pilosus) is a fairly large member of the weasel family at half a metre long, it is restricted to a scattered distribution through Algeria, Tunisia and Morocco. Due to its long, luxuriant fur, short legs and long tail, it looks for all the world like a graceful, hairy snake. Like a snake, this creature most often preys upon rodents, using its low slung, tubular body shape to invade narrow burrows and warrens. Jerboas, gundis, gerbils, mice and ground squirrels are its most common prey items, which it kills with a bite to the back of the skull. Being nocturnal, it’s thick fur provides good insulation during the cold desert nights. One or 2 litters are produced each year, but in spite of this the Viper Stoat has become very rare. The reason for this is that its luxuriant pelt has made it a target for the fur trade.