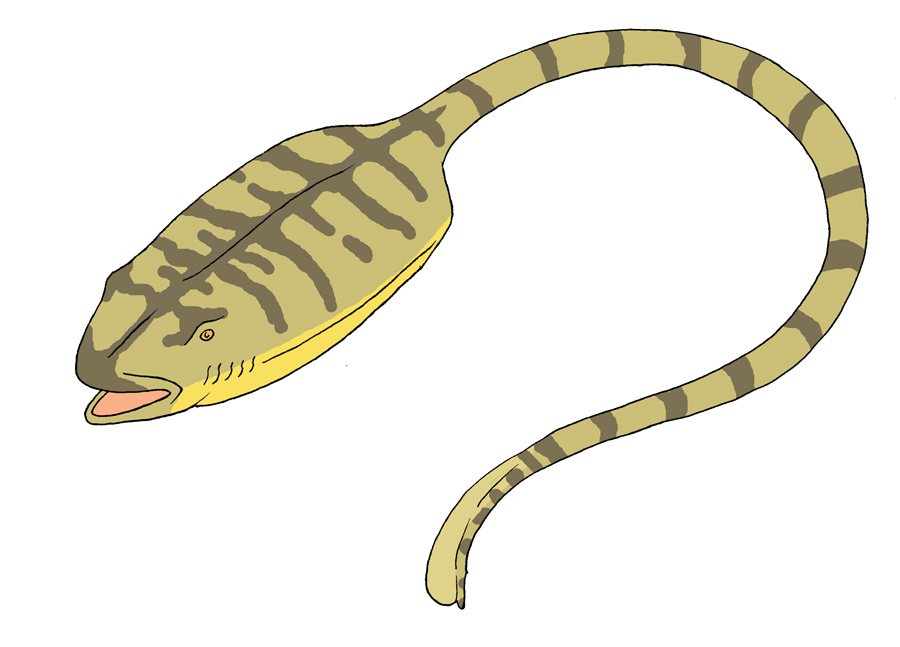 Location: Tropical waters of the Indian and Pacific Oceans.

Time: Sighted 3 times between 1867 and 1925, possible other sightings are dubious.

Heuvelmans’ many sea-serpent categories may be mostly false and overly speculative, but they can be very creative. He approached a few rather unusual sightings as representing its own category of sea serpent, the Yellow-belly. All these reports generally seem to show a very long, tadpole or spermatozoon-shaped animal, consisting of a fairly large body and a very long, thin tail, possessing a banded coloration.

As to what these sightings are, there is little in the way of answers, speculative or otherwise. Suggestions as to its identity have ranged from a shark-like fish, to even a giant prehistoric amphibian. Some of the eyewitness sketches look almost as if they could be abandoned maritime paraphernalia, like buoys or ropes. It is possible that some of the sightings may simply be mistaken observations of known animals, such as the whale shark, not taking into account the larger part of the body underwater. Despite the fact that a giant marine fish would not be an unprecedented discovery, the sparseness and ambiguity of the reports does not make this very likely.

But what of a speculative Yellow-belly? For the sake of believability and originality, we shall suggest that if it were real, a shark or ray would be true to form. So, the Yellow-belly (Tenuiselache jaune) is a very large cartilaginous fish, with a maximum length of 21 meters, most of which consists of its long, whip like tail. It is in fact, a primitive kind of ray, related to guitarfish and sawfish, seeming in many ways intermediate between sharks and rays. It inhabits the open ocean throughout the tropical indo-pacific, usually swimming passively near the surface, or basking. It hunts by drifting in sunlit surface waters, laying still, using its large flat fore body and long tail to cast a large sheltering shadow, which attracts shoals of fish and squid. When a suitable prey item, or even more than one, shelter near it, it surges forward briefly, by convulsing its tail, and sucks the prey into its toothless mouth. The fact that a whole distinct lineage of shark-like fish has remained almost un-detected in the open sea warrants further scrutiny by ichthyologists and palaeontologists.