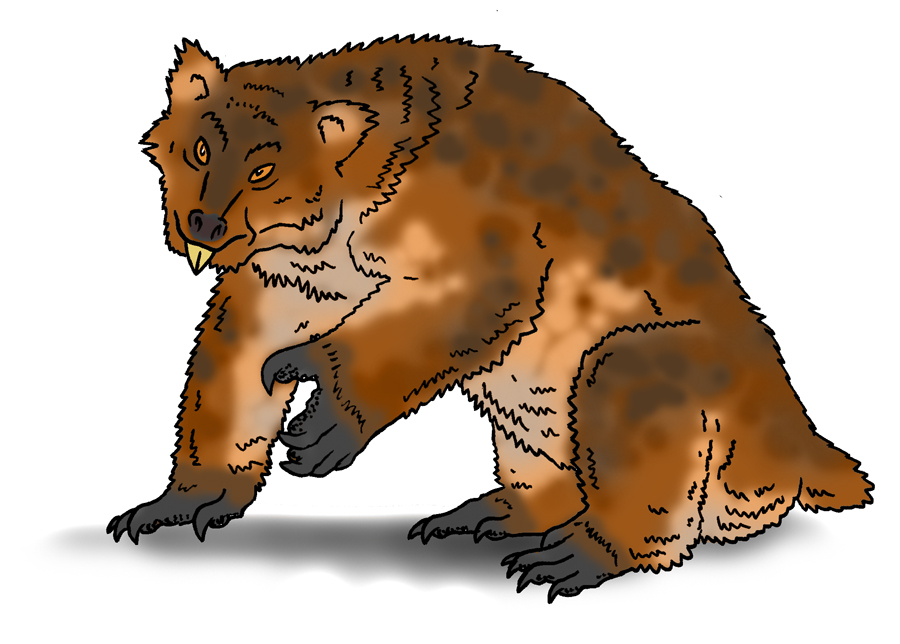 The infamous Australian Drop Bear is another tall tale that is commonly used to haze the inexperienced. Reputedly a giant, carnivorous relative of the koala, it seems to prefer attacking foreign tourists, and is said to be placated by an Australian accent. It supposedly awaits victims high in eucalypt trees, and pounces on them from above, as its name suggests. Most commonly, naïve American or European tourists are told to beware of this savage marsupial, and quite often they believe this complete fabrication.

As with any tall tale, any reality behind this folklore is purely coincidental. The titular creature is simply made up for a joke, to fool the inexperienced. Similar traditions in the lumber woods of colonial North America are infamous, and gave rise to not one, but well over two dozen such denizens. Incidentally, male Koalas in rut are notoriously aggressive, and have been known to jump onto innocent people passing below, sometimes resulting in minor injury.

Predatory relatives of koalas and other marsupials are, of course, not entirely fictitious. The prehistoric Thylacoleonids (marsupial “lions”) were indeed related to both wombats and koalas, and were ferocious carnivores, robust and somewhat catlike. The Australian Museum’s wildlife catalogue contains a fraudulent entry on the Drop Bear that may further fuel speculation. So, the Drop Bear (Thylarctos plummetus) has been previously supposed as a close relative of the koala, and certainly it resembles it in many ways. But simple perusal of the dentition of this rare creature tells us that it is, in fact, a late-surviving marsupial lion (Thylacoleonidae), the huge stabbing incisors and flesh-cutting blade-like molars most resembling Thylacoleo itself. The Drop bear is a large animal, weighing 120 kilograms and measuring 130 centimetres long, covered in coarse reddish fur with darker mottling. The long balancing tail of other marsupial lions is reduced to a small bobtail, because the animal has a far simpler hunting method than its ancestors. It hunts by ambush, waiting concealed in the branches of large trees, dropping several meters onto large vertebrate prey that pass below, like kangaroos and wombats. The prey is often stunned by the impact of a large predator from such a height, and is killed quickly with a bite to the neck or nape, which is powerful enough to crush the windpipe, or even the back of the skull. It will occasionally hunt koalas as well, knocking them out of trees and pursuing them for a small distance on the ground. It is most commonly found in closed canopy forest, as well as open woodland and the edges of dense forest, across eastern and south-eastern Australia wherever there are big trees with branches large enough to bear its weight. Human attacks are usually mistaken on the part of the drop bear, but have earned this creature an undeserved reputation as a man-eater.